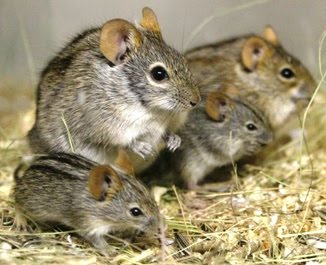 Journal Article of the Month

My photo and the accompanying paper (see List of publications) were published in this issue.

Well, I nearly missed February, but here we are, and 2020 is just flying by. Thoughts of holidays are in the past and all of us are now busy busy busy! Already it’s so close to the start of the University semester that I find myself really wondering where the time has gone. But enough of that! We’re here to continue talking about fawn-footed mosaic-tailed rats Melomys cervinipes (Figure 1). Hopefully, by now, you’ve realised that their biology is pretty cool, if somewhat complicated. So now we’re going to take a closer look at other aspects of these amazing little animals, starting with their ecology.

So let’s start off with the population characteristics (or at least what’s known from the literature).
Population density can vary from about 0.08 – 0.4 individuals per hectare in rainforest fragments.
However, in sclerophyll forests, population density can be higher, around 0.88 – 1.27 individuals/ha.
It seems that abundance starts to increase when vines and leaf litter increase, or when the quantity of climbing plants, sub-canopy and ground cover increases. Now this makes sense because mosaic-tailed rats are arboreal, so things that make it easier to climb to the canopy to find more resources would be beneficial. Likewise, increase of ground cover reduces the likelihood of being spotted by predators, also providing a survival advantage. Indeed, mosaic-tailed rats seem to do quite well in disturbed areas and on forest edges.

Typically, mosaic-tailed rats are associated with cool, dark, damp conditions of continuous forest (Figure 2). However, their habitat preferences do become less restricted as they progress southwards in their distribution. They can be found in wetter, but more open forests, wet sclerophyll rainforest, subtropical rainforest, warm-temperate rainforest, forest fragments, grassy open forest adjacent to rainforest, open shrubland dominated by dry, tall eucalypt species on sandy soil, closed palm forests, coast mangrove forests and cane fields adjacent to forests. Mosaic-tailed rats prefer structural complexity. They will use both the forest floor, as well as vertical forest layers up to around 16 m above the forest floor. They’ll spend up to 30-90% of their time travelling in the canopy. Generally, they will only travel short distances, although they can travel kilometres if needs be. Range length is generally only about 80 m or so, which lengthens in winter as food becomes harder to find, but shortens in summer as food becomes abundant. Home range size for both sexes is about 0.42 ha, but the core area of activity is much smaller, only about 0.09 ha.

Mosaic-tailed rats are dietary generalists. Being primarily herbivorous, they feed on foliage and vegetation, but also on fruits, seeds, fungi and flowers (Figure 3). They may take insects, although observations from captive animals suggest that this is not common. In addition, they will eat human food products. I have found that banana chips are a particularly favoured treat for captive individuals. There is evidence for regional differentiation in diet, which makes sense, as plant distributions vary regionally too. There is also evidence for differentiation in diet depending on disturbance state, with mosaic-tailed rats living in forest edges typically having a higher proportion of fruits, leaves and flowers in their diet.

In the next blog, we’ll continue focusing on the ecology of mosaic-tailed rats.

You can read more about my research in my publications, listed on my blog. You can also find me on ResearchGate, the James Cook University website, Twitter and Facebook.
Posted by Tasmin at 2:51 PM No comments:

Welcome to January 2020! It’s a new year and that means a new start to blogging again. It’s amazing how quickly time flies by as it’s already mid-January! But, we’ll get back into the swing of things.

So, I’ve brought you up to speed with the reproductive biology of male and female mosaic-taild rats Melomys cervinipes (Figure 1). There was a lot of minute detail in that, but I hope it gives you a sense that are quit complicated little beasts. So, I’m going to carry on the story now by focusing a little more closely on the ontogeny of mosaic-tailed rats.

But first off, what do we mean by ontogeny? Ontogeny refers to the development of an individual organism, or specific anatomical or behavioural features of an organism, from the earliest stage to maturity (and, in some cases, beyond even that). Basically, it refers to how an organism develops over its lifetime, and what factors affect its development. Ontogeny is one of the four questions posed by Niko Tinbergen to understand an animal’s behaviour. Not only does an animal’s behaviour change over time, but the anatomy and physiology underlying that behaviour (i.e. the behavioural machinery) can also change.

In general, we don’t really know much about the ontogeny of mosaic-tailed rats, outside of their reproductive biology. One of the major ontogenetic stages is sexual maturation, which normally occurs around 45-60g body mass or 95-120mm body length. By the time sexual maturity is reached the adult pelage is nearly completely attained, changing from a smokey-grey (Figure 1) to a brown-russet red (Figure 2). The reproductive anatomy also changes at this time, with the testes descending in males. In females, the nipples become prominent and the vagina becomes perforate. For females, sexual maturation is also the time the oestrous cycle commences. Females have a long cycle (10-24 days), with a relatively short period of receptivity (1-3 days of oestrus).

Obviously, the most momentous ontogenetic developmental stages occur to an individual while it is in the womb. Mosaic-tailed rat gestation lasts 27-40 days, which is really long for rodent in general. Interestingly, mosaic-tailed rats tend to give birth to twins, a boy and girl, although they can have up
to four pups (I’ve only ever seen three). In mosaic-tailed rats, the young (Figure 3) are born with fully erupted incisors, unlike in some other murids. This enables them to cling to their mother’s nipples, which they do quite tenaciously for the first 7-10 days. Development is rapid following birth, with the pups having eyes open by about 5-7 days, and being fully furred by 10 days. They start eating solid food around 10 days of age, and weaning generally takes place around 20 days of age.

In the next blog, we’ll take a more in-depth look at what we know about the ecology of mosaic-tailed rats.

You can read more about my research in my publications, listed on my blog. You can also find me on ResearchGate, the James Cook University website, Twitter and Facebook.
Posted by Tasmin at 2:42 PM 1 comment:

Well, I know that I said I was going to continue with mosaic-tailed rats, but December just flew by and before I knew it, Christmas has come and gone! So, I'll keep this relatively short and sweet for the last post of the year! I managed to achieve my goal of posting once a month! I hope that you've enjoyed the information you've received so far. I'll keep on going in the new year and let's see where that journey takes us :)

Wishing you a very Merry Christmas and a happy and successful 2020! 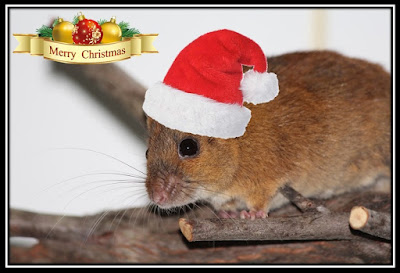 You can read more about my research in my publications, listed on my blog. You can also find me on ResearchGate, the James Cook University website, Twitter and Facebook.

It’s November, and time for Blog 11. I can’t believe that it’s nearly the end of the year already! Last time I wrote, I was asking for your help with crowd funding a project to continue studying the awesome Australian rodent, the fawn-footed mosaic-tailed rats Melomys cervinipes (Figure 1). And I left you waiting patiently to learn all about the reproductive anatomy and biology of male mosaic-tailed rats. So, here you are. The information you’ve been waiting for. There may be some confusing terms, but I’ll provide some information to help make it easier to understand.

Adult breeding males have scrotal or inguinal testes. In layman’s terms, that’s the groin area. The testes are quite large in relation to the body size, being about 2% of the body mass. This is even big for a murid rodent! Regression of the testes can be seen when males are not breeding. This makes sense – if you’re not going to breeding, why waste a heap of time producing sperm that you’re not going to use?

While morphologically similar to other rodents, the glans penis is quite long and wide in comparison to other Australian rodents. In anatomical terms, this is really referring to the rounded head or tip of the penis itself. In M. cervinipes, it is longer and wider than the glans penis of the grassland mosaic-tailed rat M. burtoni (Figure 2), but is actually also a little narrower too. The glans penis has small spines near the tip that disappear towards the base, and there is epidermal folding. The proximal baculum is short and wide. Okay, so what is this “baculum”? Basically, it’s a little isolated bone derived from connective tissue. What does it do? Well, believe it or not, but it aids reproduction by maintaining stiffness during copulation.

The seminal vesicles are saccular and well-developed, and have coagulating glands on the inner curves. Their function is to produce the seminal fluid that carries the sperm. The seminal vesicles are bound to the prostate at the base. Active spermatogenic seminiferous tubules are much wider than inactive ones. The sperm averages about 107 μm in length, and is more complex in structure than is seen in Australasian Rattus. The falciform (meaning “curved like a sickle” or hooked) head has two additional elaborate ventral F-actin processes extending from the upper concave surface, joining at the base. The apical hook ultrastructural organization resembles the sperm of Rattus, but there are two ridges of subacrosomal material along the upper convex nuclear margin. Males have lots of types of accessory glands. In juvenile males (Figure 1), pretty much everything is smaller in size, although similar in structure. In addition, while spermatogenesis may occur, it generally doesn’t fully progress past the primary spermatocyte stage.

In the next blog, I’ll move on to looking at the ontogeny and reproduction of mosaic-tailed rats.

You can read more about my research in my publications, listed on my blog. You can also find me on ResearchGate, the James Cook University website, Twitter and Facebook.
Posted by Tasmin at 5:51 PM No comments:

Tasmin
I am an animal behaviourist with a passion for rodents, and a growing interest in marine molluscs.

Word of the Month

Quote of the Month

Poem of the Month

Life
By: Charlotte Brontë (1816-1855)
LIFE, believe, is not a dream
So dark as sages say;
Oft a little morning rain
Foretells a pleasant day.
Sometimes there are clouds of gloom,
But these are transient all;
If the shower will make the roses bloom,
O why lament its fall ?
Rapidly, merrily,
Life's sunny hours flit by,
Gratefully, cheerily,
Enjoy them as they fly!
What though Death at times steps in
And calls our Best away?
What though sorrow seems to win,
O'er hope, a heavy sway?
Yet hope again elastic springs,
Unconquered, though she fell;
Still buoyant are her golden wings,
Still strong to bear us well.
Manfully, fearlessly,
The day of trial bear,
For gloriously, victoriously,
Can courage quell despair!